KB Kookmin Card upped the car financing rate to 5.5 percent this month from 4.1 percent last month to reflect hike in the base rate by the central bank. On a 5.5 percent rate, a buyer who purchases a 40 million won ($30,861.82) car this month faces a gross interest payment of 5.84 million won, 1 million won more than a month ago.

Samsung Card’s minimum financing rate averaged at 2.9 percent as of July 1 from 2.3 percent a month earlier. 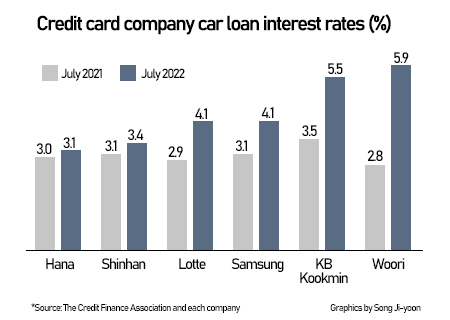 Car demand in the U.S. has been slowing after monthly payments of new car buyers last month averaged $700, gaining 13 percent from the previous year, when the U.S. base rate had been at zero territory. The range was yanked up to maximum 1.75 percent last month and is expected to go higher this month.

The so-called carflation – the cost of owning a car due to higher car and fuel prices – can hamper with carmakers’ hope for growth through green migration.

New car prices in the U.S. climbed 12.6 percent on year in May. The average new car price of Hyundai Motor and Kia also jumped a maximum 16.2 percent as of the first quarter from the end of 2020.

Finished carmakers all commonly have been struggling with waning sales due to the production disruption from prolonged chip shortages. Sales of passenger vehicles in the U.S. are estimated to have reached 2.89 million units in the second quarter, losing 23.9 percent from a year ago, according to Automotive News.

Korean finished vehicle makers except for Kia reported reduced revenue from the previous year this month.

By Lee Sae-ha and Lee Ha-yeon

Nearly a Quarter of US Investors Have ...