In today’s busy hypercar world, with just 612bhp and a relatively affordable price, the Ferrari Portofino M feels almost underpowered, and dare I say ‘economical’, for a prancing horse. But, again, I ask the question I asked when I drove the old Portofino: do you really need more?

“Affordable” is a relative term. But when the word is spoken with a Ferrari, which happens very rarely, it becomes more relative than usual. Still, in today’s world of rising inflation, the price of the Portofino M, which starts at just under ₹4 crore, doesn’t seem too bad, especially if you look at the prices of other products in Ferrari’s portfolio. But I digress; Back to the point, in 2018 – when we could still travel without fear – I found myself in a tony boathouse in Dubai, staring at a fleet of Portofinos, which we were about to drive.

As it was Ferrari and Dubai we had a police escort with us, who politely told us that we could only push our cars on certain sections of the highway – above the strictly enforced speed limit – and the lead car would tell us when we could do that. And after spending that day with the Portofino, I came back amazed at the car’s capabilities. At least on the well-paved roads of Dubai, the ride was very comfortable. It was a roomy two-seater, with all the toys you need, and more than that, it was a hardtop convertible. This meant you could close the roof during the day to take advantage of the excellent air conditioning, and you could open the roof and enjoy the convertible experience in the evening. Couple all that with more performance than you need, a top speed of over 300 km/h, a beautiful design and an engine that not only loved to sing but also to rev, and you’d know why I was wondering if you would never need anything more than the Portofino, especially in a country like India. After all, it was a serviceable Ferrari, with the benefits of a convertible and the smoothness of a sonorous V8. Not to mention the excellent value for money, all things considered, of course.

So when Ferrari New Delhi called to ask if we’d like to drive the updated Portofino M, I naturally jumped at the chance. 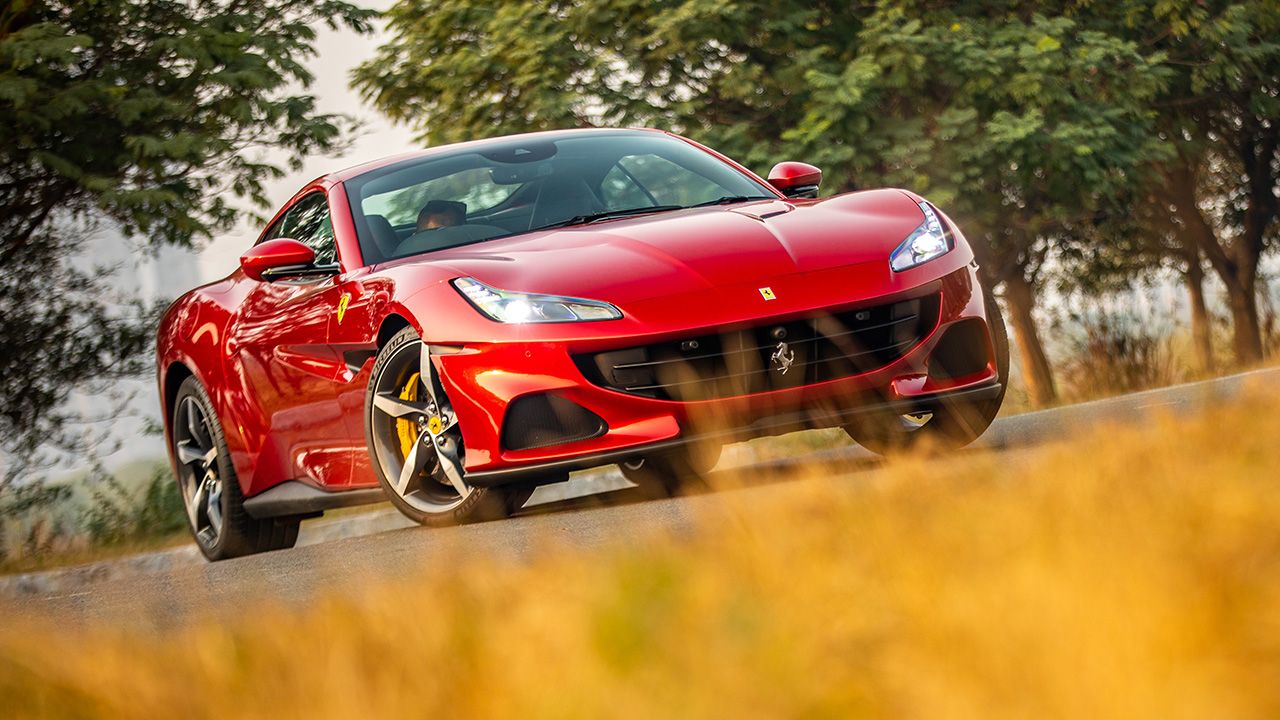 If you are a Tifosi, you already know this, but I will mention it anyway. The ‘M’ in the Portofino M stands for ‘Modificata’. Is it just me or do even trivial words sound fantastic in Italian? I mean Jaguar XK ‘Modified’ just doesn’t sound the same, does it? As far as actual changes go, visually the update is pretty light. There are some changes to the front bumper, with more aggressive air dams and aerodynamic improvements, with new vents, which now flow into the Portofino’s front fender side vents. The rear of the car also gets a new bumper and the rear diffuser has been completely redesigned – now it can also be made of carbon fiber. Personalization, of course, is an important aspect of owning a Ferrari – customers often spend a lot of time and money customizing their cars. Ferrari’s merchandise sales are also a big part of their business, but that’s a story for another day. 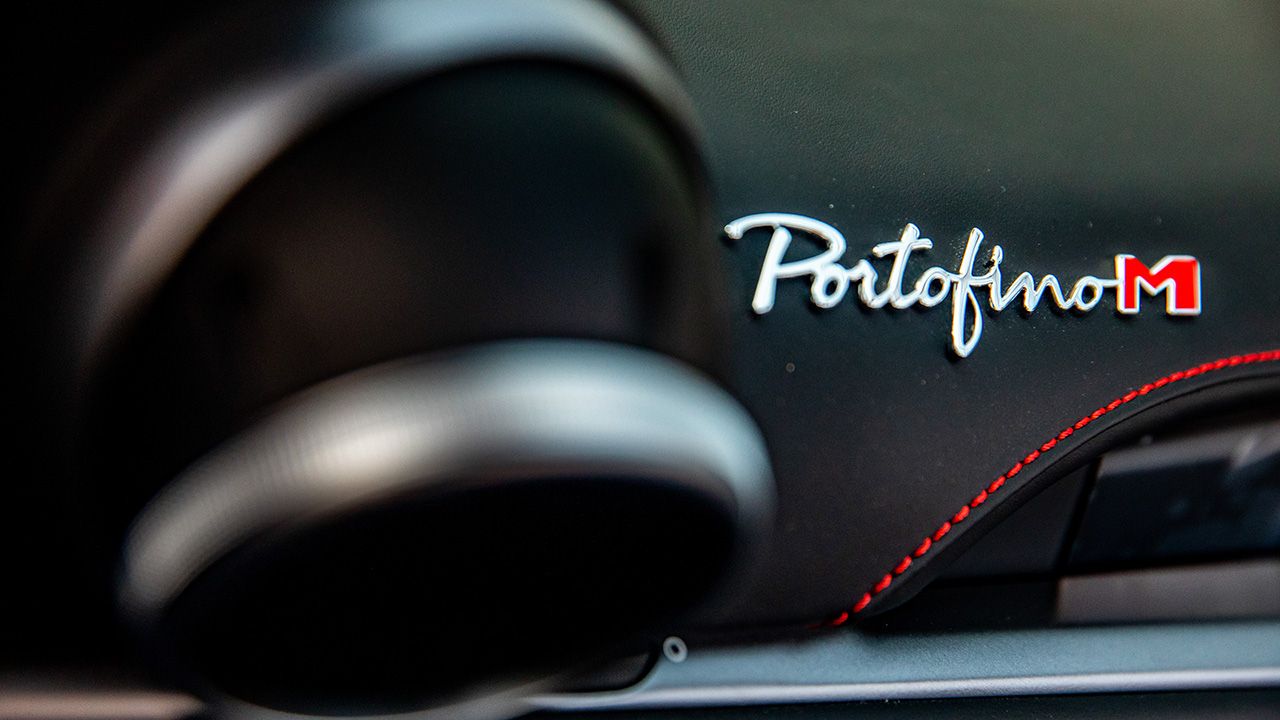 Most of the changes to the Portofino focus on the car’s engine and driving dynamics. Now, for my part, I was not able to think of many ways to improve the old Portofino, but if the Ferrari boffins wanted to improve it further, who am I to complain? The biggest change, of course, is an all-new 8-speed gearbox, which replaces the old 7-speed unit. It is an oil-immersed dual-clutch unit, capable of handling the added power and torque of the updated engine. Now on to the engine – and oh, what an engine it is! – making its debut in the 488, it won the ‘International Engine of the Year’ award four times in a row. 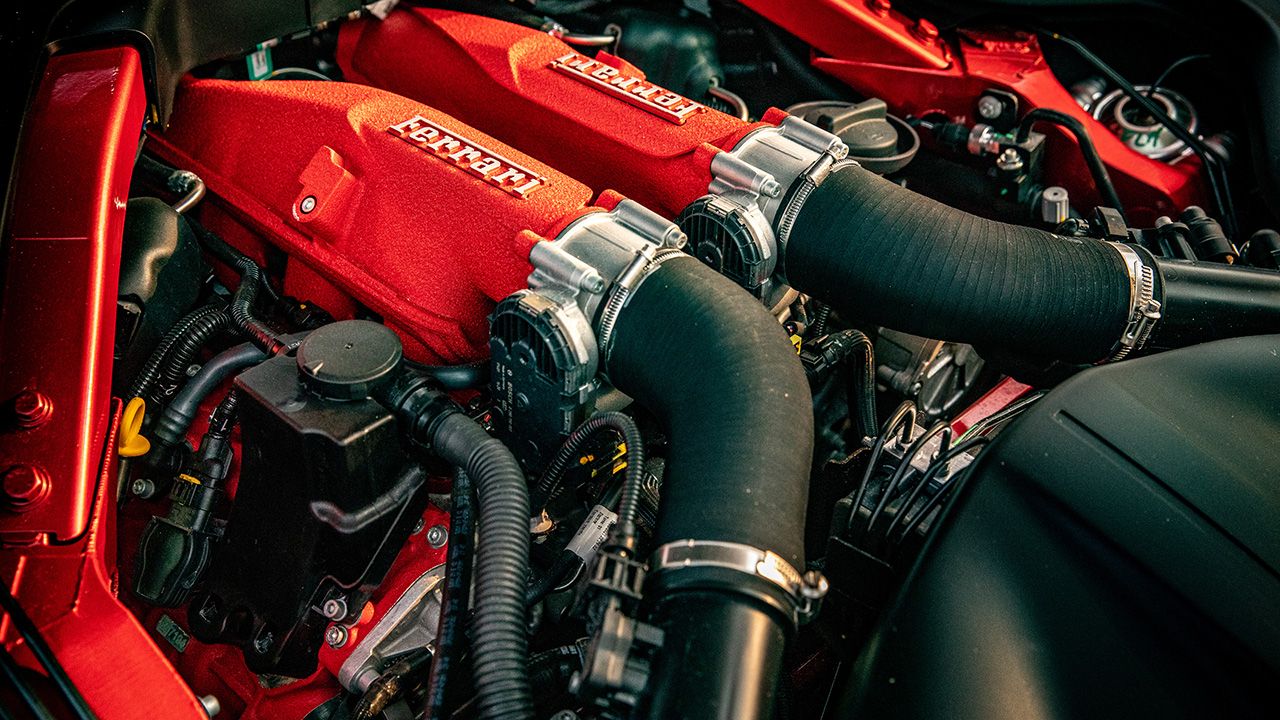 The Portofino’s 3.9-liter twin-turbo V8 is one of the best engines made today. And with its crackling red finish, it looks stunning too.

Needless to mention, then, it’s no slouch – it produces 612bhp and a whopping 760Nm of torque and maintains a redline of 7,500rpm. As soon as you fire up the engine, you can feel its aggressive nature, not to mention the smoothness of its gorgeous V8 sound. But the real surprise lies in the dual nature of the engine and its power output. With the manettino designed for comfort, you can use this car every day for your daily commute – it cruises with just a slight rumble and has no problems handling city traffic or cruising at low speeds. But when you flex your right foot, the engine really changes character. The revs go up like there’s no tomorrow, and the power delivery is nothing short of breathtaking. In fact, having driven many turbocharged cars over the years, my first remark after driving both Portofinos was that they had no turbo lag and felt almost naturally aspirated. And that’s because Ferrari has made an active effort to ensure that turbo lag doesn’t exist in its engines, and it shows. 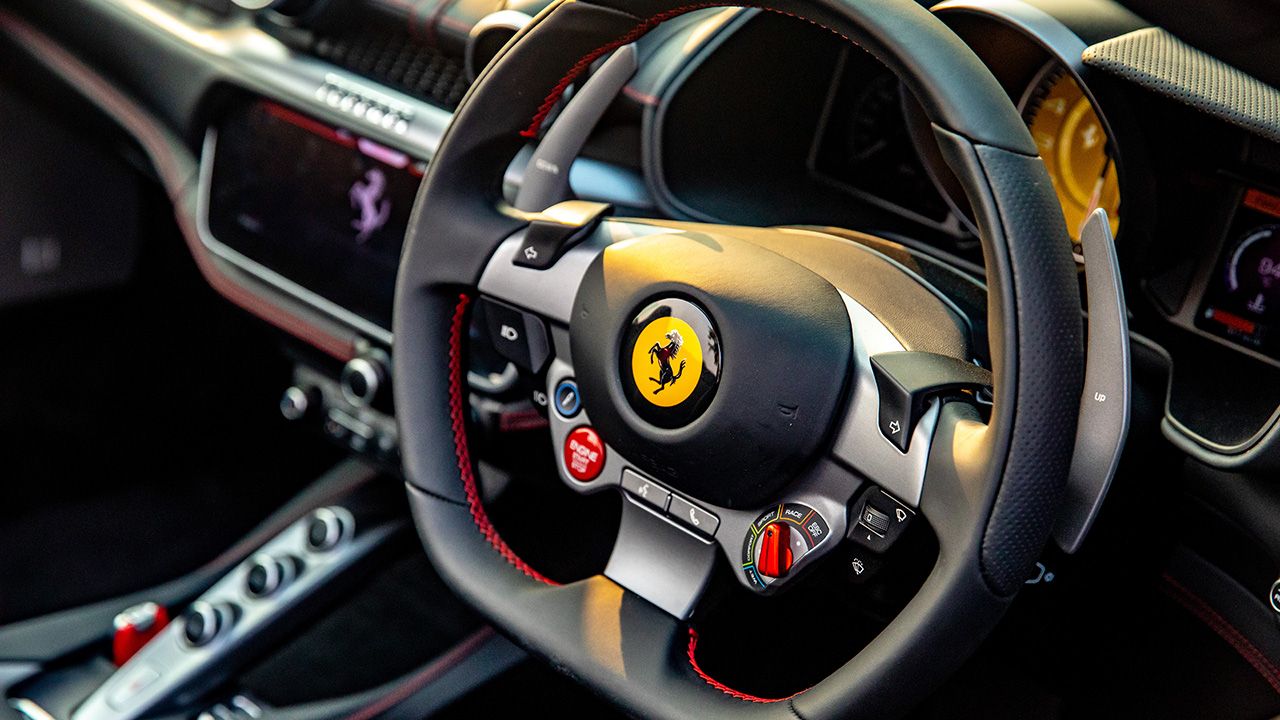 Now, in terms of performance, the stats speak for themselves: it can cancel the 0-100 km/h sprint in under 3.5 seconds and has a top speed of over 320 km/h. That said, to understand or even get a sense of what this car is, you really have to experience it firsthand. That explosive acceleration, that evocative soundtrack and that luxurious feeling of being wrapped in the finest Italian leather – well, life rarely gets better than that. And, as far as usability goes, you can certainly drive the Portofino in the heat of India, the air conditioning and engine cooling systems are more than adequate to handle our conditions, and even the suspension, despite the wheels of 20 inches, is reasonably comfortable. And without the hyperactive nature of some of its larger siblings, the Portofino seems better suited to Indian conditions. 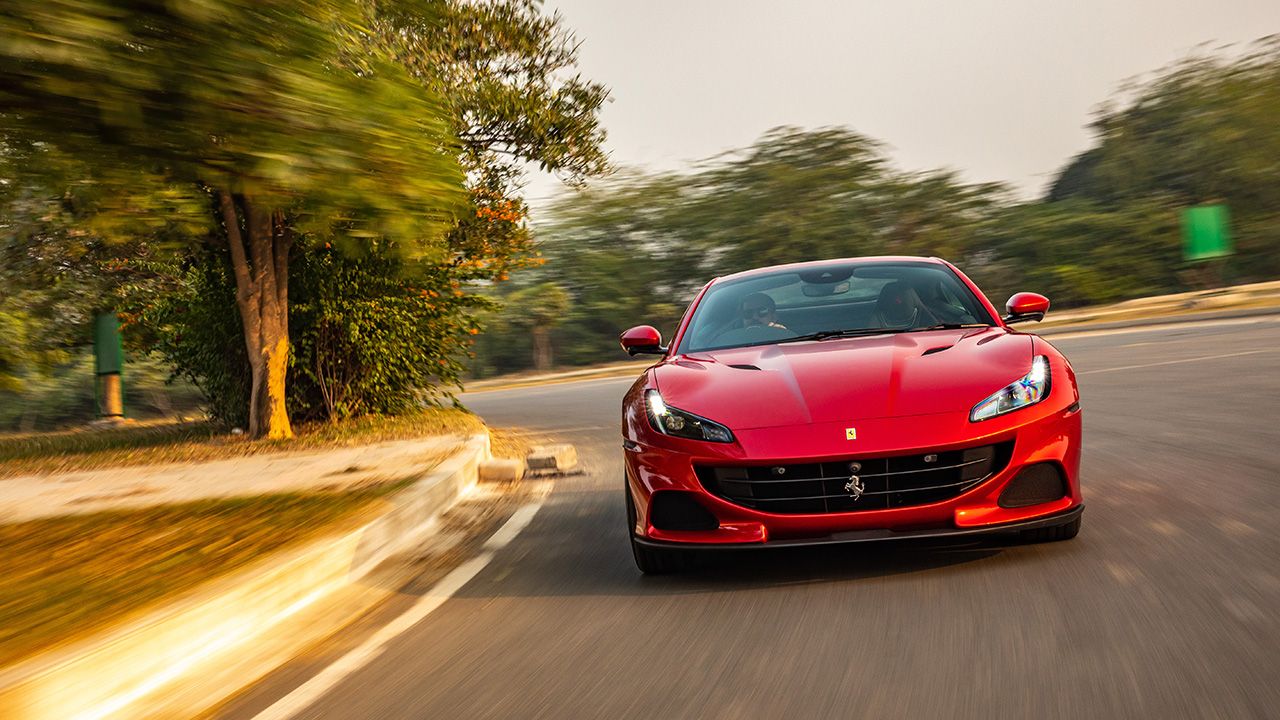 Do you need more?

By the way, growing up, the Ferrari 575M Maranello was like a holy grail to me. It featured a 533 hp V12 and was the flagship of ordinary Cavallino brand road cars. And just 20 years later, an entry-level car in the range now has more power than that. Additionally, the current flagship has nearly twice the power. So when a Luddite tells you that cars haven’t progressed over the years, show them those stats. In addition, today, the Ferrari range comes with a 7-year maintenance plan, that’s what we call having confidence in its products.

Of course, I’m a firm believer in the age-old adage that ‘there isn’t too much power’, but the Portofino M really begs the question: do you really need its larger siblings? I understand the appeal of the SF90 or even the sublime numbers of the 296, but to be honest, given its convertible appeal, cruising nature and sublime performance, the Portofino M is more than enough for most of those who can afford it.

X factor: Ferrari’s entry-level supercar is everything you need and more!