Toyota Fortuner has dominated the full-size SUV segment since its introduction. Now the Ford Endeavor has been discontinued, there is no one to disturb the Fortuner. The SUV is known for its presence on the road, low maintenance cost and off-road capabilities. Despite the facelift, the design of the Fortuner has not been significantly changed. Because of this, some people started to think of the Fortuner as an old vehicle. For this reason, owners have started modifying their Fortuners to be different. Here we have a Toyota Fortuner which has been modified with a Lexus grille.

The video is uploaded to YouTube by Rohit Mehta Sai Auto Accessories. The store installed an aftermarket bumper that looks like a Lexus bumper to a Toyota Fortuner. Lexus is Toyota’s premium brand only. There are also other modifications to the Fortuner.

The Fortuner seen in the video is a 2017 model. There is a huge Lexus-type bumper fitted to the Fortuner. The grille is huge with a chrome surround. There are also inverted L-shaped LED daytime running lights. There is no change to the Fortuner’s headlights.

There are also plastic side panels that sit above the side steps. The rear has also been modified with an additional bumper. It looks more aggressive and gets fake exhausts and a fake diffuser. The store also installed black bezels on the taillights and an additional light strip above the taillight bezel. Pillar lights are also fitted to the D-pillars. The original chrome trim that is between the taillights has been replaced with a different unit. The new unit also wrote Fortuner, but it’s now backlit. The reflective strips have also been replaced with LED lights. 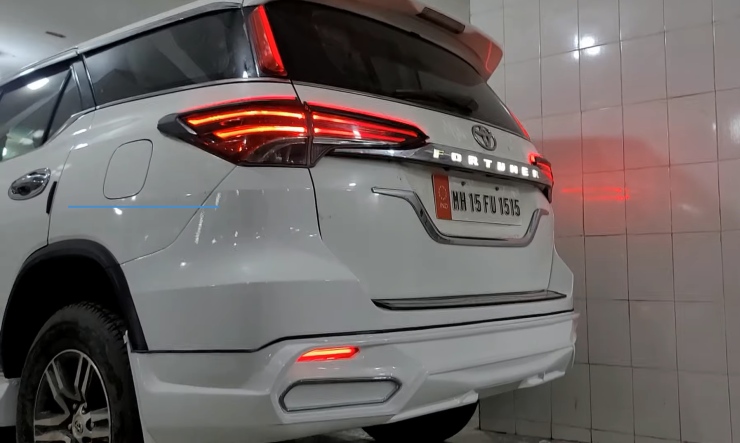 There are also window visors finished in chrome. Other changes include a different infotainment system, improved speaker system, different floor mats and ambient lighting. The owner of the SUV says it took two days in the workshop to make all the modifications and he looks quite happy with the modified look. Prices for the modification were not revealed in the video.

The Japanese manufacturer still offers the Fortuner with a gasoline and diesel engine. The gasoline engine remains the same. It is therefore a 2.7-liter unit that produces 166 PS of maximum power and 245 Nm of maximum torque. It is offered with a 6-speed manual transmission or a 6-speed torque converter automatic transmission. The gasoline engine is only offered in rear wheel drive, you can’t get a gasoline Fortuner with an all-wheel drive system.

Toyota readjusted the diesel engine to produce more power and torque. It now delivers 204 PS of maximum power and 500 Nm of maximum torque. It is mated to a 6-speed manual gearbox or a 6-speed torque converter automatic gearbox. It is offered in rear-wheel drive and all-wheel drive versions.